How to Change CPU Fan Speed Without BIOS

The CPU fan is one of the key components in your device as it is built with only one thing in mind, “keep the system cool and functioning properly. What a CPU effectively does is generate enough air to counter the heat produced by your device when working.

Problems start to arise when you start running heavy applications on your device or put in a load of work, due to which it produces excessive heat. Subsequently, to counter the heat produced, your fan starts generating air to cool down the system. But if the fan speed is set at a certain level, it cannot produce enough power to cool down your overheating system. 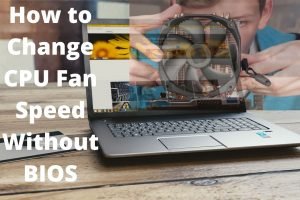 As a result, you may experience an underperforming device. Also, too much heat produced by the CPU may lead to it having a shorter lifespan. Therefore, under such circumstances, you may have to alter the speed of the CPU fan. This alteration lets you control the fan speed of your CPU and enable it to keep your CPU heat at bay. Did you know, How to Reduce Laptop Heat (Fix Overheating Quickly)

What is a good CPU fan Speed?

When talking about the RPM at which a CPU fan should operate, it really comes down to what activity your CPU is performing. For normal CPU levels, where you are doing your routine tasks, 70% of your total Fan RPM is ideal for your device.
However, when you start heavily gaming on your device, the CPU generates more heat, reflecting the heavy amount of work that your device puts in to match the performance levels you demand from it. This is when one may consider altering the CPU Fan speed.

For this purpose, a rule of thumb may come in handy for those who cannot monitor their system temperature regularly. In this case, when the CPU temperature rises over 70C, then it is ideal to tweak your CPU Fan speed to 100% of the total Fan RPM. This keeps the heat in check so that performance levels aren’t compromised.

For a better understanding, you can follow the below-mentioned ranges.

Although, a disclaimer should be kept in mind that under ideal circumstances, it is recommended that your fan settings are kept on AUTO and are managed by your BIOS. Deciding to alter the fan speed clearly depends on and should be sought only if you think your BIOS setup is unable to determine the heat of the device and alter the fan speeds accordingly

Ways to control your Fan speed without BIOS

Now that we have established that it is preferable to let your BIOS setup automatically control your fan speed, we also know that in case your BIOS isn’t performing ideally in this regard, you may take control in your own hands and alter the speeds as per your needs. Did you know, How to Keep Gaming Laptop Cool (9 Tested Ways)

Use a Fan Control Software

Instead of going full manual mode, you can choose to let Fan Control Software do the work for you since the BIOS setup has let you down. Using a fan control software relieves you of the stress of continuously monitoring your device temperature. It automatically does that for you. Then, you decide whether you alter the fan speeds yourself or let the software do that for you.

In the former, the Fan Control Software will silently increase or decrease the fan’s speed to match the heat the device is producing during your use.

Now again, you have decided to use a Fan Control Software but, which one? Making this choice is also a critical decision. A well-known software with positive reviews and that supports your installed Windows (hopefully Windows 10) should be the priority.

SpeedFan is a software that is recommended by many top gamers out there and is one that you should consider for your device.

The main highlight of this software that has led to its recommendation by many is the fact that it is a free utility for your Windows system that has advanced level configurations and lets you use those advanced features while you set up the speeds of the fans.

SpeedFan is one of the pioneer software that has been around since the beginning of time (Lol, I mean the computing world). However, due to its complex interface, it can be difficult for newbies to get the hang of it.

Therefore, one should be careful about how and when to use it because any flaw in your tweaks may lead to damage to your CPU and motherboard eventually.

Then wait for it to install (there’s nothing new in this for you, but just in case)
At Startup, the software will scan your device (it can take a while, depending on how massive your system is – from the inside). It will then display information like:

Understand the software and play around with some tools

Once you are done with the installation process and you can see all the information of your device on the screen in front of you, now it’s time to play with the different modes available in this software. Let me make it very clear that before you try anything, make sure you acquaint yourself with the different icons in the interface so that you are aware of what’s happening with your device at all times.

Then you may proceed with altering the fan speeds against certain set criteria, for example, if the CPU temperature rises above 70C.

As I have made it clear, using SpeedFan is not an easy task; therefore, if you doubt the use and control of the fan RPMs, you always have the safe side to choose. Yes, don’t try to be over-smart and let the software monitor and control each and everything.

However, if you feel the need to intervene, especially when you are planning for a heavy gaming session, you may take control in your hands, set the criteria for the fans, sit back and enjoy your game while SpeedFan does the work for you.
Using External Fan Controllers

It is not necessary that all internal software provide the desired results as you expect from them. It is quite possible that due to problems like hardware incompatibility, license issues, or bugs in the software itself, you may still face overheating issues with your device.

Under such circumstances, you have the option of using External Fan Controllers. These are basically externally connected devices that monitor the temperature of your CPU and control the fan speeds accordingly.

To recommend a few external fan controllers, I would suggest you go for either:

Both these devices have 6 or more pins sockets and can monitor 6 fans simultaneously. This way, you have the assurance that not only is your CPU fan being monitored, but other fans, like the system fans, aux fans, and other driver fans, are being handled too.

Furthermore, they have an anti-short-circuit protection protocol built-in to prevent any unnecessary damage to your CPU and motherboard.

The CPU, known as the Central Processing Unit, is where your device handles all the major tasks. Hence, when much load is put upon it (especially during gaming), the heat generated needs to be controlled and cooled down before any damage is taken. This way, you can ensure that your machine is running efficiently at all times.

The system knows itself better than anyone, and hence, the BIOS setup knows how and when to alter the CPU and system fan speeds to counter any heating situation.

However, when it comes down to the fact that your BIOS is running too much “by the book,” it may overlook certain situations where your device needs more from its fans than what BIOS diagnoses the situation to be.

In that case, an internal software controller may be able to fulfill your needs in this regard. But anyway, since you have already decided to take control of the situation manually, then external fan controllers are a better option, in my opinion.
This is because they are explicitly designed to monitor every fan in your system and control their speeds as per your set criteria effectively.

Make sure you take care of the heat growing inside the device. All available and recommended options have been provided to you in the article above.
Happy Gaming! Or whatever heavy work you need your PC for.