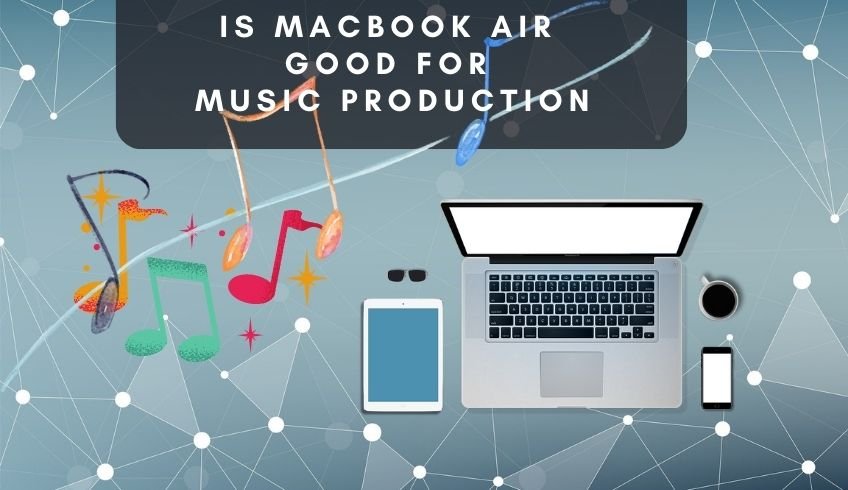 If you want to go into music production, your computer is one of the most crucial pieces of equipment you’ll need. Desktop computers are excellent investments for your home recording studio. Still, laptops provide more flexibility if you need to travel while working on a project or playing live constantly.

Although Mac isn’t as popular as PCs, they’re a strong competitor, thanks to its powerful operating system and clean, minimalist appearance. Is the MacBook useful for music creation, despite its proven security, stability, and usability?

The MacBook is ideal for music production because it offers a more reliable operating system, an appealing user interface specialized in music production and is crash-proof. Popular music software such as Logic Pro is also included with the Mac. The CoreAudio drivers in MacBooks assist in enhancing audio quality overall.

Let’s face it, when it comes to looks, performance, or brand, Apple is one of the most popular brands on the market. The main question now is which Apple laptop is better for music production.

I’ve been using a MacBook Air for a few months now, and I’ll be giving a quick review and some tips that you might find useful if you’re considering using one for music production.

Can Macbook Air Be Used To Make Good Music?

Making professionally produced music in the comfort of your own home is now possible thanks to modern technologies. Anyone can make a big hit with only a laptop, and Apple offers various devices geared for creatives, including music producers.

The MacBook Air is one of Apple’s most budget-friendly models, but is it capable of creating full-fledged tracks?

Another budget-friendly laptop for music production is the MacBook Air. For entry-level music producers or graphic designers, the MacBook Air is suggested; its small size, low price, and excellent performance will boost your studio once you start making music with it.

The MacBook Air, especially the most recent version with Apple’s M1 Chip, is a good laptop for music creation. The standard model comes with 8GB of RAM, the absolute minimum for operating GarageBand and generating high-quality songs with 20 tracks.

The MacBook Air can surely manage small basic tasks, with all non-essential apps closed, maybe fairly large ones, but it will struggle with huge projects.

Is the MacBook Air the Best Music Production Laptop?

Due to its inherent restrictions, such as the amount of RAM and Processor Speed, the MacBook Air is not the ideal machine for music creation. In this situation, the Apple MacBook Air is an excellent choice due to its decency.

Thanks to GarageBand, you can even start making music with a MacBook Air straight out of the box, which comes pre-installed. It may not be the finest software, but it is an excellent learning tool. It contains all of the necessary features for making music. GarageBand is also highly user-friendly and intuitive, making it ideal for beginners.

You can make music on a MacBook Air just as easily as you do on an iPhone or iPad. You can compose, organize, mix, and master radio-ready recordings depending on the specifications of your MacBook Air. Also, keep in mind that there are MacBook Air models with improved specifications.

The Specifications of the MacBook Air

If you have GarageBand installed on your old MacBook Air, you can probably use it to make music with it. But let’s say you’re in the market for a new MacBook Air. The specifications will be somewhat better in such a scenario, and it will be completely acceptable for music creation even if the full specs are not used.

The MacBook Air is one of the first Mac to be upgraded with an Apple-designed Arm-based processor rather than an Intel processor, as previous MacBook Air versions were. These chips are known as “Apple Silicon,” and the M1 is utilized in the MacBook Air.

The M1 is Apple’s first Mac-specific System on a Chip, which means it has the processor, GPU, I/O, security features, and RAM all on a single chip.

The MacBook Air with the fully loaded M1 Chip is the greatest MacBook Air for full-fledged music-producing apps. The other versions will function fine, but if you have the option, choose the M1.

A unified memory architecture, or UMA, is one of M1’s characteristics. It unites high-bandwidth, low-latency memory into a single pool. It implies that the M1 chip’s technologies may access the same data without duplicating it between various memory pools, resulting in significant system performance gains.

The Intel-based MacBook Air has a dual-core Intel i3 CPU, which is sufficient for modest music production. You may, however, upgrade to a quad-core i5 or i7 processor. It has 8GB to 16GB of RAM and a 256GB SSD that can be upgraded.

The MacBook Air has a Retina display from 2018, which is more shaped, sharper, and clear than the previous non-Retina display. The MacBook Air features a resolution of 2560 by 1600 pixels, a pixel density of 227 pixels per inch, and a total of more than 4 million pixels, with a maximum brightness of 400 nits.

True Tone is a feature in the MacBook Air display that adjusts the display’s color to fit the lighting in the room. True Tone is powered by a multi-channel ambient light sensor included in all MacBook Air models, which can assess both the room’s brightness and color temperature.

All of these features, especially the True Tone Retina Display, make for a good music-making laptop.

Older MacBook Air versions may still be used to make music. They’re good enough for starters, but experienced music producers may still utilize them to create completely mastered Spotify or SoundCloud recordings. Any choice older than 2012, on the other hand, is unlikely to function, so avoid them if you don’t want to be frustrated.

The Advantages of Producing Music on a Mac

It’s no secret that a huge percentage of music producers and DJs rely on Mac. Mac comes with different characteristics that make it excellent for music creation, despite the clean, minimalist appearance typical of MacBooks?

Some of the reasons why MacBooks are ideal for music production are listed below.

I. Macbooks Have A User-Friendly Interface:

MacBooks are also simpler to understand and use. While it may be difficult for a Windows user to switch to macOS, MacBooks are much easier to grasp for newcomers. It means that after you’ve become used to a MacBook’s interface, learning how to edit audio and compose tracks will be a lot easier.

Did you know, How to Change CPU Fan Speed Without BIOS

II. The Operating System of MacBooks is more stable

Almost every Mac fanatic swears by MacBooks, claiming that the Mac OS is better than Windows. Unlike PCs, MacBook hard drives do not require defragmentation since the Mac OS is set to do it automatically, resulting in lower long-term risks of hardware failure.

Did you know, How to Make Ableton Run Faster (11 Proven Ways)

One of the MacBook’s strongest selling features is the abundance of premium software available. While PCs provide a wide range of music and video creation tools, nothing beats Mac’s specialist music production applications, such as Logic Pro and Garageband.

Garageband is generally included for free with every new Mac, allowing new music makers to experiment with high-quality studio loops and sounds. After having some experience in music production, most producers progress to Logic Pro.

MacBooks are recognized for their sleek, minimalistic appearance, making them easy to operate, especially creatives who are always on the move. One of the best things about owning a MacBook is that Apple continually develops its Mac OS and offers free upgrades to Mac customers.

Because of the high-quality hardware and software used, your MacBook is likely to survive a long time even if you regularly use it for heavy music production activities.

Furthermore, most MacBooks’ simple and small form makes them ideal for artists, producers, and DJs. Because a superior OS reduces the odds of crashing, you may confidently use your MacBook for intensive recording and editing activities, as long as it has a powerful CPU and adequate memory.

Is MacBook Air Good For Garageband?

The lowest suggested Processor and RAM for running the application is i3 processors with 4GB RAM, thus upgrading to an i5 and the default 8GB RAM in the MacBook Air will be advantageous. Music and video creation will be difficult on a MacBook Air. I recommend the MacBook Pro, which comes with 512GB of storage and 16GB of RAM.

Garageband and iMovie are excellent programs for learning how to make music and videos. Once you’ve mastered them, you may replace them with their more professional counterparts: Final Cut Pro and Logic Pro

If you’re looking for something a bit lighter, the MacBook Air now has the M1 processor, making it a really capable music-producing laptop for most users.

But if your music production software and other programs demand a high-performance CPU, you might want to put your credit card on hold and seek something else.